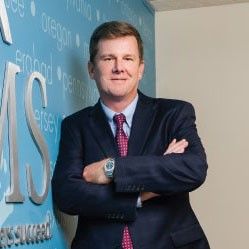 Robert Graybill joined FMS in 2000 and has over 25 years of experience in the retail grocery industry. Currently, Mr. Graybill leads the FMS team in meeting their goal of helping retailers to succeed through benchmarking, best practices, and decision support.

Prior to joining FMS, Mr. Graybill held financial and operations positions in the retail grocery industry. He has authored the FMS/NGA Independent Grocers Survey and FMI's Annual Financial Review and is a frequent speaker at many industry events. In addition, he has taught at the IGA Coca-Cola Institutes Supermarket Management Program which serves both domestic and international retailers. Mr. Graybill holds an MBA from the Executive Program at Loyola University Maryland and has completed the NGA Executive Management Program at Cornell University. He previously served on the Accounting Advisory Board at the University of Baltimore and currently on the Deans advisory Board at the Merrick School of Business at the University of Baltimore and the Parents Advisory Board at Babson College.

Robert Graybill has been named a finalist in the E&Y Entrepreneur of the Year in both 2014 and 2015.